My nephew, Kevin, inspired me by a question that he asked some time ago. That question has very much been in the back of my mind for some time now. The question was, “what kind of work (occupations) did our ancestors have?” So, today, I thought I would start to document some of the occupations that make up my story of ancestry and the also the ancestry story of those that I love. I will simply write a paragraph or so about several of those ancestors and hope that you will enjoy sharing your insight into this topic as well.

I will start with my maternal grandfather. His name was Grover Cleveland Ream. He was born on 16 Sept. 1885 in Denver, Miami County, Indiana. In the US census from 1900, Grover was living in Ann Arbor, MI and was a mere 14 years old. The 1900 census shows that his father Benjamin Ream (my great grandfather) was a carpenter. Grover, like his father, would also become a carpenter. It was always my understanding that he was exceptional at his trade. I found a copy of his death certificate that shows the last date that he was engaged in his occupation was February of 1931. He died the next month on 26 Mar 1931. He was young, only 45 years old at his death. My mother was a mere 5 years old at the time her father died. In my ancestry notes, I have copies of news articles showing his association with the Carpenter’s Union 512 of Ann Arbor where he served as an officer. In addition to many of the important buildings he constructed, there was also the home he built for his family at 520 N. Main Street, Ann Arbor, MI that would become not only a residence, but a guest home.

My maternal grandmother was Emilie “Amelia” Angelina Grayer Ream. She was born on 14 Sept. 1885 in Ann Arbor, Washtenaw County, Michigan. Actually, as I write this blog, I notice for the first time that my grandparents birthdays were a mere 2 days apart. My grandmother would affectionally be called “Grandma Pet. ” I loved her beyond measure. She died 1 day after my 11th birthday party on 13 Feb 1965. I have many treasured memories of her humor, sweetness, and joy for life. My grandmother’s occupation was to run the guest home in her residence on Main Street in Ann Arbor. I was under the impression that the guests who stayed at the home were primarily business or sales men who were often associated the University of Michigan. In the basement of the home was a large ironing mangle (it impressed me greatly) that was used to iron the sheets of the house guests.

My paternal grandfather was George Kellogg Hess, Sr. He was born 6 Sept. 1891 in Benton Harbor, Berrien County, Michigan. He was born on a successful fruit farm whose harvests supplied the Chicago market and other large cities. He wanted to leave the farm! My father told me that George did NOT want to be a farmer. In the WWI draft application he completed on 5 June 1917, he states that he is employed by Western Electric Company, Hawthorne Station, Chicago. He went on to graduate from the University of Michigan in 1921 with a degree in Electrical Engineering. I have been told that he was a genius. He worked in Chicago for the electrical company until 1930. Perhaps you will recall the story my father told us so often. My father became direly ill in 1930 (he was 5 years old) and the doctors in Chicago said the only hope for my father’s survival was to move the family to the countryside and out of the large city. What? I know…huh? Anyway, this put George back at the orchard farm in Benton Harbor, MI. This was the same place he had so wanted to leave as a young man. My father’s story is even more amazing because at exactly the same time as my father became ill, George’s father Juan Hess died leaving the farm to George. George must have not liked going back to the farm enough that when his obituary was written it states that he “was a retired electrical engineer” without mention of his successful management of the farm. I have collected numerous newspaper articles that show that George was an activist, even to the point of traveling to Washington to lobby for certain changes that primarily related to pipelines, farm taxes and migrant workers.

Henrietta was born on 31 Jan 1894 in Illinois. In 1914 she graduated from the Chicago Musical College. She was a very accomplished pianist. (As a note, in 1930 when the family was forced to move to Benton Harbor, MI and back to the farm, she would not agree to go unless she had her grand piano too.) In the 1920 census, Henrietta was 26 years old and single. She is living with her parents. In the census records, she lists her occupation as Dictaphone Operator. I recall that my father told me this was an honorable position that she was able to claim because her pianist’s hands moved so quickly on the keys of the dictaphone.

E.L. was born on 5 August 1906 in Bond, Stone, Mississippi. His home in the 1930 census (when he was 23 years old) was in Columbia, Marion, Mississippi. He listed his occupation as school teacher. In the 1940 census, he still is a teacher and states that he has had 3 years of college education. (This question was particular to the 1940 census, so I don’t know when he actually attended college.) It is known that he was a graduate of Mississippi College. In 1940 he was living in Hattiesburg, Forrest, Mississippi.

Christine was born on 10 June 1905 in Grange, Lawrence County, Mississippi. In the 1930 census she is 24 years old and states that she is a student. This must have been college, but I do not have educational records for her. In the 1940 census she lists her education level as having completed 1 year of college.

Frank was born on the 30 November 1904 in Mendoza, Argentina. He arrived in New York in 1916. In the 1920 census, Frank states that he is a clerk in a silk factory. In his 1928 petition for citizenship, he lists his occupation as contractor. In the 1940 census, he lists his occupation as an Insurance Agent. In the 1940 census, folks were asked to record their level of education. Frank states that he had completed school through 6th grade.

Angie was born on 6 September 1909 in New York City, New York. In the 1940 census she lists her occupation as worker in the clothing industry.

When Eugene Ludlow Barnes was born on August 5, 1906, in Bond, Mississippi, his father, Samuel Tilden Barnes, was 29 and his mother, Mittie Campbell, was 23.

Eugene was only 2 years old when his father Samuel died. Samuel was only 32 years old at the time of his death.

After Samuel (Eugene’s father) died (because something fell on his foot in the sawmill where he worked and he got blood poisoning,) his second wife Mittie Campbell Barnes (Eugene’s mother), petitioned the courts to establish a will for her late husband.

Mittie Campbell Barnes was the biological mother of Eugene and of his sister Hilma Barnes. Mittie’s petition to the court eventually wins her rights to all of Samuel Barnes’ property. 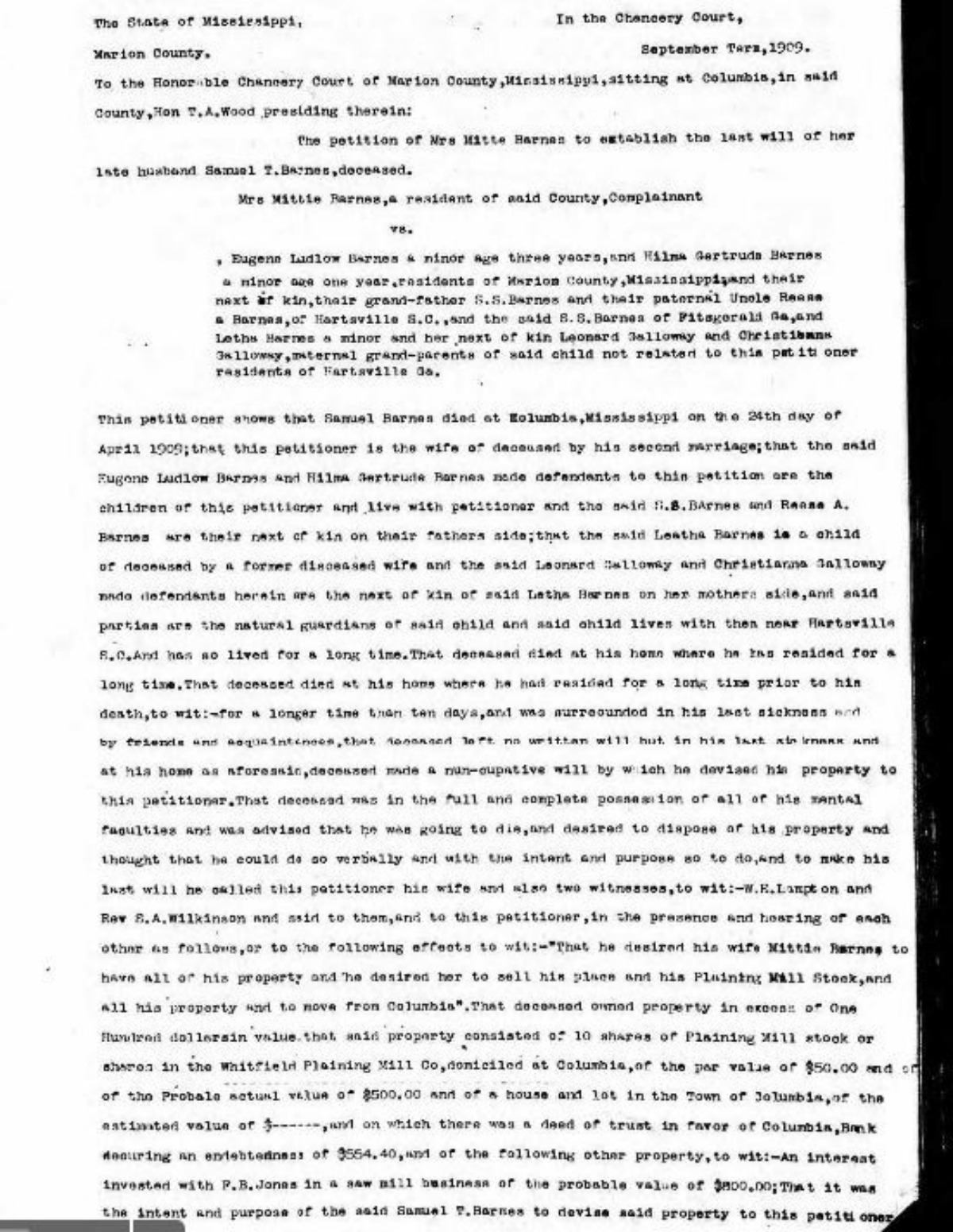 Eugene’s mother,  Mittie, goes on to marry a second time to a man named Henry Little. Mittie and Henry have 3 girls who then become Eugene’s half sisters. I think you will like the names of these 3 half sisters:  Jonnie Lee Little, Sammie Lou Little, and Henry Alice Little.

Eugene had another half sister because his father had been married and had one child before he married Mittie. This half sister was the child of Samuel Barnes and Mary Letha Galloway. Her name was Aletha Barnes.

Eugene’s obituary shows some of these relationships:

Here is a timeline of some events in Eugene’s life

1910    US census shows Eugene is living with his mother Mittie and her brother Arthur and his sister Hilma on Pearl Street in Columbia City, Mississippi

1920   US census shows Eugene is 13 years old and living in the house of his step-father and mother.

1930  Eugene is living with his step-father and his mother. He is age 23 and is a teacher in the public schools in Columbia, Marion, Mississippi

1940 US census shows Eugene is living in Hattiesburg, Mississippi with his wife and his sons Samuel and Thompson. He is a school teacher.

1948 City directory of Hattiesburg shows that Eugene is with his wife and is employed as a deputy sheriff.

1948 Deputy Sheriff EL Barnes is in the Hattiesbury American Newspaper after breaking up a cattle theft ring.

1949 Deputy Sheriff EL Barnes is in the Hattiesburg American News after a 2 hour shoot out with a 29 year old man who was charged with intent to kill.

1949 Deputy Sheriff EL Barnes is in the Hattiesburg American Newspaper after raiding a moonshine distillery.

1951 article in the Hattiesburg American News about EL Barnes responding as sheriff to a woman who killed her husband.

1951 article in the Clarion Ledger Newspaper about Sheriff EL Barnes who had to chase by gunpoint two men who were cracking safes.

1951 article in the Hattiesburg American Newspaper stating that EL Barnes will not renew his expired tenure as sheriff.

1953  City directory for Hattiesburg shows that Eugene is with his wife and is employed at Ingass Ship Yard. Their residence address is 114 W. 4th

1953  death of his mother Mittie Campbell