The Hess/Higbee genealogy is well documented.  You can read the book Hess-Higbee Genealogy compiled by W. Emerson Babcock here:

In W. Emerson Babcock’s genealogy compilation, it is recounted that this young married couple “pressed the frontier” and made their way to Berrien County, Michigan.  The book (see page 22) then continues to describe the obstacles on their pioneer journey including the need for them to abandon their wagon when they were mid-stream in the St. Joseph River.  They mounted themselves on the horses and continued on their way through the forest trails of the Native Americans until they find Mary Ann’ parents who had gone before them to establish a dwelling. Mary Ann and George’s westward journey had taken them through Chicago towards St. Joseph, MI. They were literally traveling through marsh lands.  See here the documentation in A twentieth century history of Berrien County, MI Chapter XXVI. HagarCounty. https://www.ancestry.com/interactive/16860/dvm_LocHist004592-00674-1?pid=1084&backurl=http%3a%2f%2fsearch.ancestry.com%2f%2fcgi-bin%2fsse.dll%3findiv%3d1%26db%3dGenealogy-glh19225593%26h%3d1084&treeid=&personid=&hintid=&usePUB=true#?imageId=dvm_LocHist004592-00674-1 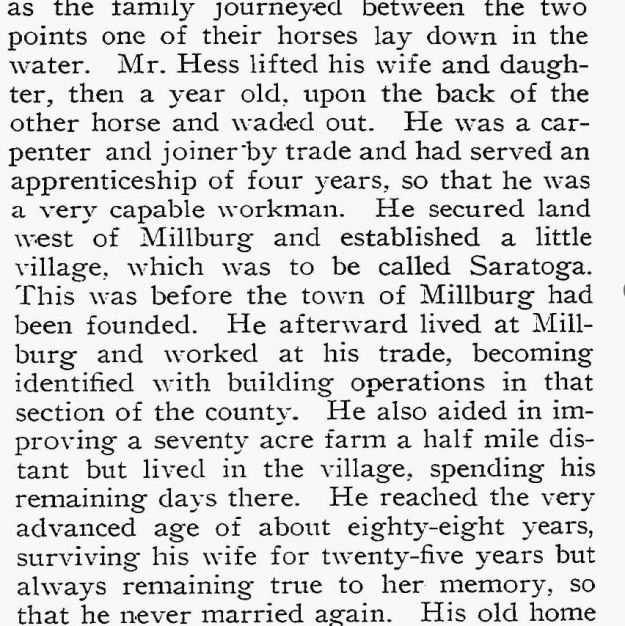 Mary Ann’s husband George was by nature a carpenter and also being of German descent, was able to speak and interpret German.  He served as a justice of the peace in the area and was “an old school Democrat.”  In looking over the news paper clipping below, it is obvious that there was a wave of immigration directly from Germany to Berrien starting in 1840.

In historical accounts it is mentioned that George was “neat in appearance” and was able to do logging without getting his clothing “dirty.” Wow- a super great life skill! All kidding aside, it does seem that he was considered a respectable and kind man and community leader. I never heard stories from my family about Mary Ann or George, so all of my knowledge has come from searching Ancestry and the web and of course the entire Hess-Higbee compilation by Babcock.

Here is my connection to Mary Ann Higbee Hess

Hess Sr.
Linda Claire Hess
You are the daughter of Robert Lawrence Hess