When Eugene Ludlow Barnes was born on August 5, 1906, in Bond, Mississippi, his father, Samuel Tilden Barnes, was 29 and his mother, Mittie Campbell, was 23.

After Samuel (Eugene’s father) died (because something fell on his foot in the sawmill where he worked and he got blood poisoning,) his second wife Mittie Campbell Barnes (Eugene’s mother), petitioned the courts to establish a will for her late husband.

Mittie Campbell Barnes was the biological mother of Eugene and of his sister Hilma Barnes. Mittie’s petition to the court eventually wins her rights to all of Samuel Barnes’ property.

Eugene’s mother,  Mittie, goes on to marry a second time to a man named Henry Little. Mittie and Henry have 3 girls who then become Eugene’s half sisters. I think you will like the names of these 3 half sisters:  Jonnie Lee Little, Sammie Lou Little, and Henry Alice Little.

Eugene had another half sister because his father had been married and had one child before he married Mittie. This half sister was the child of Samuel Barnes and Mary Letha Galloway. Her name was Aletha Barnes.

Eugene’s obituary shows some of these relationships: 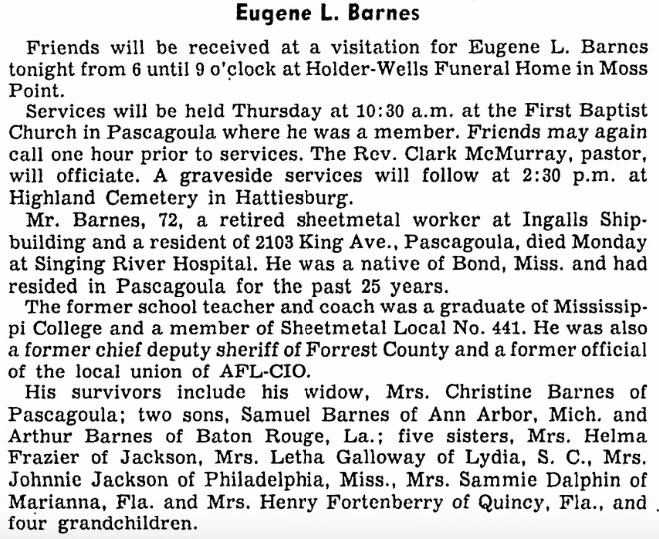 Here is a timeline of some events in Eugene’s life

1910    US census shows Eugene is living with his mother Mittie and her brother Arthur and his sister Hilma on Pearl Street in Columbia City, Mississippi

1920   US census shows Eugene is 13 years old and living in the house of his step-father and mother.

1930  Eugene is living with his step-father and his mother. He is age 23 and is a teacher in the public schools in Columbia, Marion, Mississippi

1940 US census shows Eugene is living in Hattiesburg, Mississippi with his wife and his sons Samuel and Thompson. He is a school teacher.

1948 City directory of Hattiesburg shows that Eugene is with his wife and is employed as a deputy sheriff.

1948 Deputy Sheriff EL Barnes is in the Hattiesburg American Newspaper after breaking up a cattle theft ring.

1949 Deputy Sheriff EL Barnes is in the Hattiesburg American News after a 2 hour shoot out with a 29 year old man who was charged with intent to kill.

1949 Deputy Sheriff EL Barnes is in the Hattiesburg American Newspaper after raiding a moonshine distillery.

1951 article in the Hattiesburg American News about EL Barnes responding as sheriff to a woman who killed her husband.

1951 article in the Clarion Ledger Newspaper about Sheriff EL Barnes who had to chase by gunpoint two men who were cracking safes.

1951 article in the Hattiesburg American Newspaper stating that EL Barnes will not renew his expired tenure as sheriff.

1953  City directory for Hattiesburg shows that Eugene is with his wife and is employed at Ingass Ship Yard. Their residence address is 114 W. 4th

1953  death of his mother Mittie Campbell