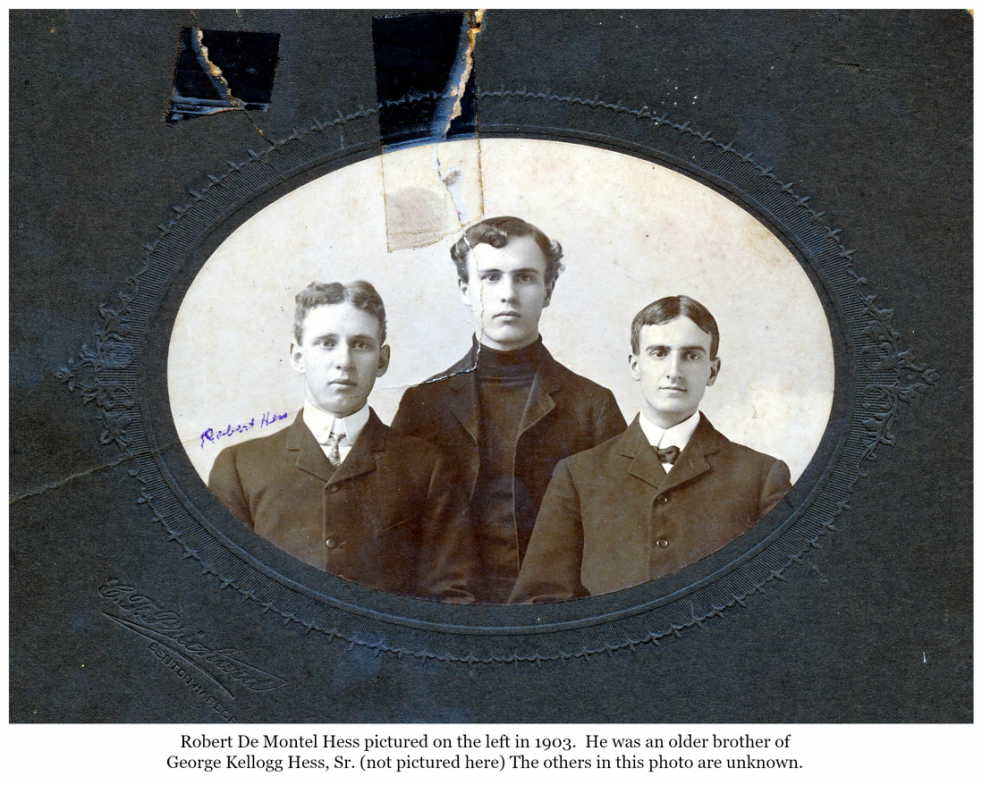 Robert de Montel and my grandfather, George Kellogg Hess, Sr. were brothers. They had two other siblings (also children of Juan and Dora) that had died as very young children.  According to Michigan death records these two Hess children died in 1880 of diphtheria.  They were Hattie (4 years old) and Perry Hess (2 years old).

I do not know why an obituary for Juan Hess written many years later on January 15, 1929, states that he only had 2 sons.  Perhaps, it was the “fashion” at the time not to mention children who died in their youth?

I chose to write this blog because I was intrigued that Robert de Montel may have been a namesake for my own father. There were 2 generations of the Hess family that had a child “George” and a child “Robert”.  My father was Robert Lawrence Hess and his brother was George K. Hess, Jr.  My father did not recall much about his Uncle Robert de Montel Hess, (the subject of this blog), because his uncle had been deceased for many years before my father was born in 1924. Even so, my father did believe that this was the relative that may have inspired the name “Robert.”  If this is true, it also makes me wonder why my father was called only by his middle name “Larry” (short for Lawrence) as a child.

Quick reference review of the names George and Robert:

The deaths of Hattie and Perry had happened before my Grandfather’s birth in September of 1891.  But, sadly, my grandfather George Kellogg Hess, Sr. would know death of loved ones (other than these two older siblings) again soon being only 13 years old when his mother, Dora Bishop Hess, died and only 15 years old when his only remaining brother, Robert de Montel Hess, died.

Robert de Montel Hess, married Alice Susanne King on October 19, 1904, in Benton Harbor, Michigan. They had one child during their marriage. He died on January 18, 1907, in Berrien, Michigan, at the age of 24 from a liver abscess due to appendicitis.  He was buried in Berrien County, Michigan.  As stated, his death, was in part attributed to appendicitis.  This is interesting to me as my father had a burst appendix at the age of 5 years old and made a rather amazing recovery.

At the time Robert’s marriage to Alice he was 22 years old.  More surprising, is the fact that Alice was a mere 16 years old when they wed.  This would make Alice only 19 years old when she became a widow.  There seems to be a date conflict.  All census records indicate that Alice was born in 1888.  However, the News article pictured below, states that she was a graduate of Benton Harbor College in 1904-shocking considering that she was only 16???  Or…was someone trying to make Alice “older” than she really was?? 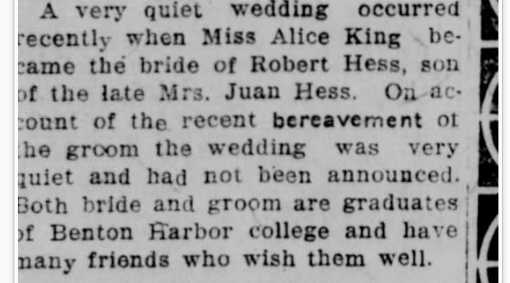 The news photo below is from 8 May 1929 – It highlights events from”25 years ago” and tells how Mrs. Juan Hess and son Robert (a college senior) entertained the Juniors at the Hess farm.  Printed in 8 May 1929 in the News Palladium.  This party took place 6 months before the wedding of Robert and Alice and 6 months before Dora’s death. 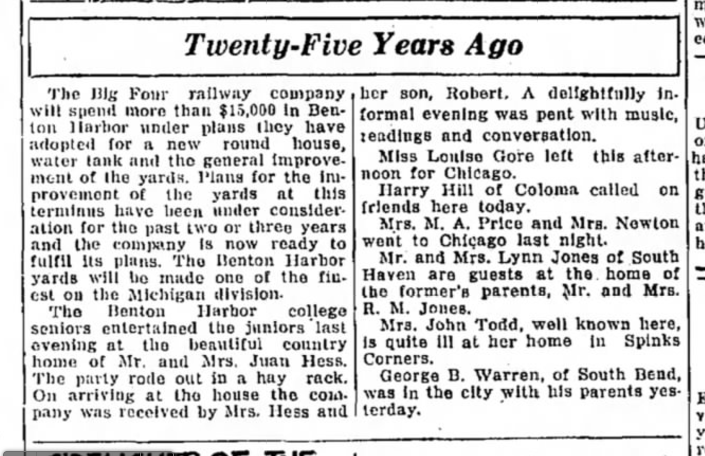 The child born to the marriage of Robert de Montel Hess and Alice King Hess was Hattie Lenore Hess.  (Her first name being the same as Robert’s sister who had perished as a child).  She was born on 17 September 1905.

Robert de Montel did not live long enough to be part of the 1910 census.  Alice is in the 1910 census living with her parents in Michigan and her 4 year old daughter who is now going by her middle name  Hattie “Lenore” Hess.  In 1910, Alice states that she is a sales lady in a furniture store in Benton Harbor.  Then, also in 1910, Alice would go on to marry a man named Harlow A. Hansley and live in Los Angeles.  She died in 1957 in Los Angeles, CA. Her daughter Hattie Lenore Hess had been living with her mother and step-father in Los Angeles.

In the 1920 census, Alice and Harlow are still in Los Angeles with Alice’s daughter who is now 14 years old and using the name  “Lenora”.

Please write and let me know if you have any other information on Robert de Montel Hess or the Hess family!