George Kellogg Hess, Sr. was my paternal grandfather.  I only met him a few times. I was 15 years old when he died.  Perhaps, not “knowing” my own grandfather has piqued my curiosity and given  me ample reason to delve into the history of this direct ancestor. Although I spent little time with this Grandparent, I was frequently told of his intelligence and some of his accomplishments especially those to modernize the Hess family orchard/farm. In other words, while there was some type of “distance” between my nuclear family and my grandparents, there was also an acknowledgement by my father of his parent’s better attributes. I heard they were brilliant, avid readers, liked ham radio, they were ahead of their times in farming technology, and were staunch Baptists. I have a few presents that were sent to me by my grandfather that included an elf doll and a book on animal footprints.   My grandfather has long since passed away from this life and I am trying to understand some of what made up his life story and in some sense “meet him.”

Hess was born on September 6, 1891, in Benton Harbor, Michigan, his father, Juan, was 41 and his mother, Dorothy, was 34.  If you read my blog about Robert de Montel Hess (George’s brother), http://wp.me/p7gsef-kJ you can get information about George’s siblings and better understand some of the losses my grandfather had as a boy and youth.

George’s parents seemed to have had a successful life.  I understand that they were farmers, but had a city and country home. Dora, George’s mother, was accomplished in social graces and many news articles of that era spoke of her love for the arts, music, sleigh rides, buffets and social gatherings. (The articles below are only samples of many articles that appeared in the news)  The orchard successfully sold and supplied Chicago markets and other large city markets with their very fine fruits.

George was a graduate of the University of Michigan in Ann Arbor, MI.  Both of his sons, George Kellogg Hess, Jr. and Robert Lawrence Hess would also graduate from the U.of M.  Henrietta had attended and graduated from the Chicago School of Music. 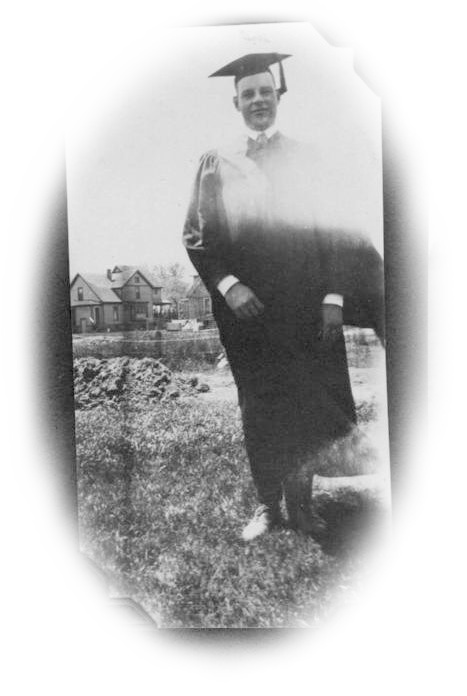 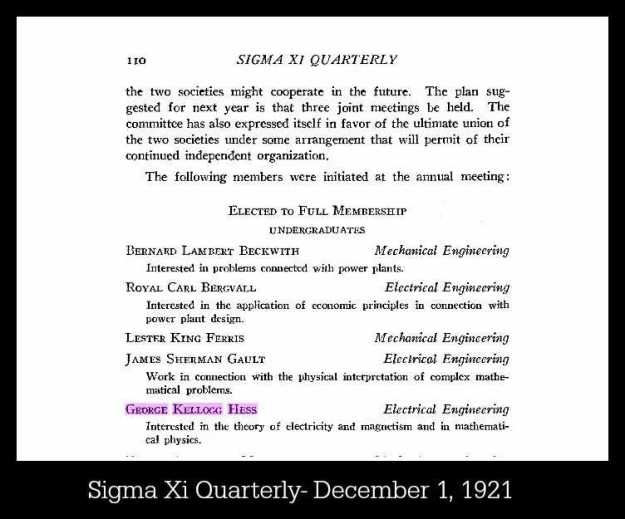 George married Jane Ellen Agens on April 21, 1917, in Benton Harbor, Michigan.   My father had not been told that his father had been previously married. But, my father had told me that his father had been in love with a young woman who became ill and was moved to a sanitarium with terminal tuberculosis. According to these legends, my Grandfather would sit on a bench outside of her window and read to her. He was not allowed to be with her for fear of infection.   It was only because of  the internet that I found proof that a marriage had in fact occurred.  Jane Ellen Agens died in March of 1919.  Following her death, George moved to Cook Co., Chicago, IL. 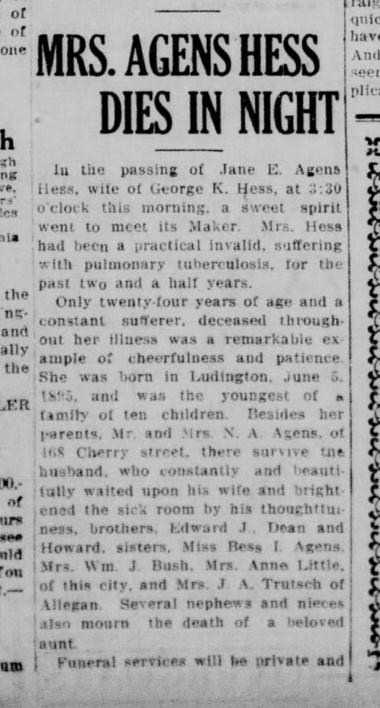 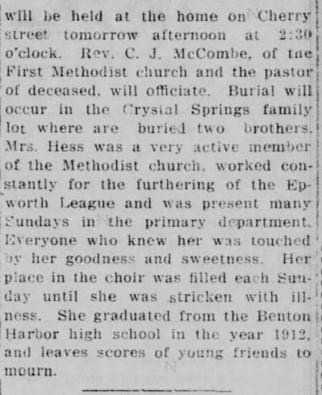 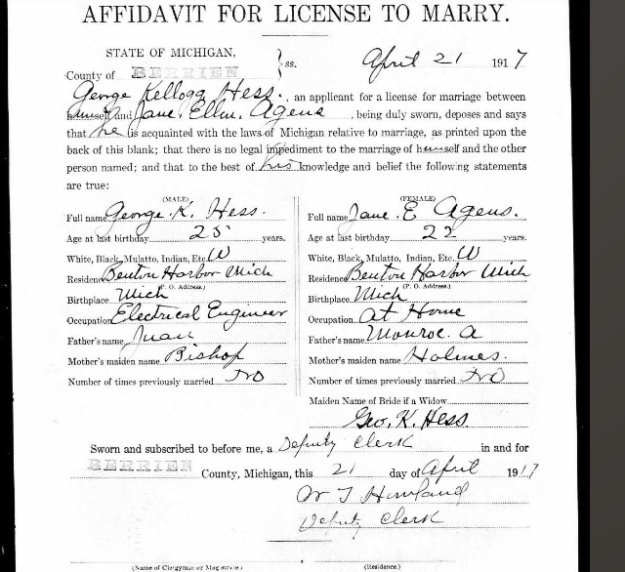 Note that George registered between 1917 and 1918 for the WWI draft and stated that he should be exempt because his wife was an invalid.

It was in Chicago, that George married Henrietta Spruhan (my grandmother) on June 29, 1921. At the time of the marriage he was 29 years old and Henrietta was 27.  They would go on to have two children together.  Their sons were George Kellogg Hess, Jr., my Uncle and Robert Lawrence Hess, my father.  This is a link to my blog on Henrietta Spruhan Hess  http://wp.me/p7gsef-2P

In 1930 the the George Hess Sr. family was living in a rented apartment in Chicago on N. Neva Ave.  The census states that they owned a radio!  George’s occupation is listed as Electrical Engineer. I don’t know how to figure this into my information, but in the same year 1930, there was also a published city directory that lists George and Henrietta living at a conflicting address of 832 S. Maple Ave. At this time, George was 7 years old and my father was 5 years old.  The 1930 census must have been taken just prior to my father’s health crisis and burst appendix.  The doctor’s cautioned George and Henrietta that my father’s only hope for recovery was to move from the city to the country.  Although this advice seems quite odd from modern day perspective, it was the advice given and my father did survive!  Therefore, it was also in 1930 that the George Hess, Sr. family returned to the farm of Juan Hess recently deceased.

As a farmer, George was also quite active in political affairs pertaining to grower’s rights, taxes, labor camps, and pipelines.  (See a few examples- there are so MANY news articles on George K. Hess, Sr. that I have not begun to gather all of them!) N

George and Henrietta lived on the Hess Farm pictured here: (note: my father told me many times how his father had sold the horses in order to use tractors on the farm- not generally a practice in this area at this time)

George and Henrietta moved to St. Cloud, Florida as their retirement residence in approx. 1958.  I visited there once.  The home was modest but set on land that had whispering pines and the lake.  One of the curious things that I noted there was a full fledged underground bomb shelter!

George Kellogg Hess, Sr. died on January 10, 1969, in St Cloud, Florida, at the age of 77, and was buried in Kissimmee, Florida.  His wife Henrietta did not die until 1984 and was never remarried.

There are only a handful of photos with me and my grandfather pictured together.  This photo was taken at my home in Ann Arbor, MI.  I remember that he had visited us there prior to getting his cataract surgery at the U of M Hospital which is located in Ann Arbor. 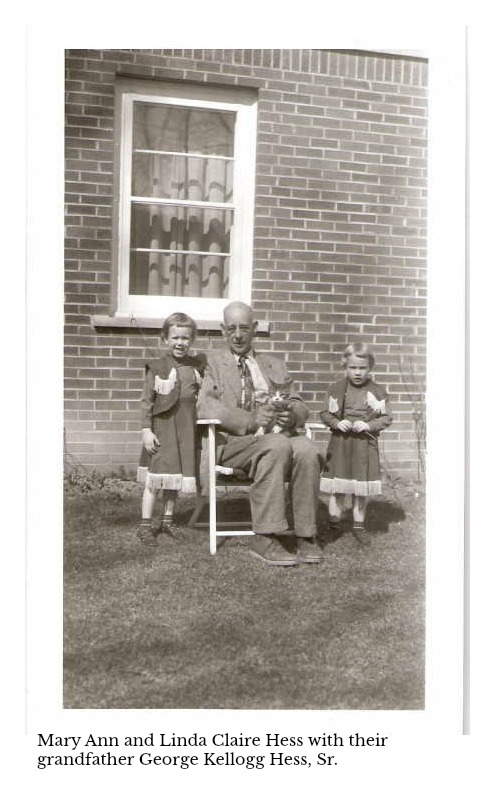