Martha Ellen was not yet a year old at the time of her father’s decease.

Martha Ellen was born on March 3, 1918 in Terre Haute, Indiana. She died in 1991 at the age of 73 in Rockford, Illinois. During much of her life she resided in Chicago, Illinois. 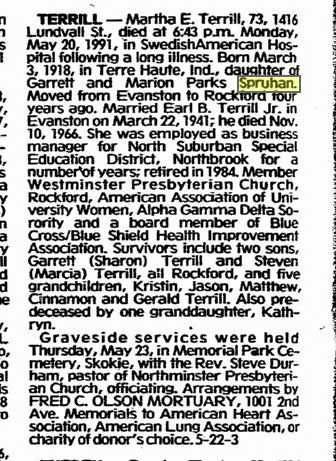 The 1940 census shows that Martha who was still single at age 22, lived with her widowed mother at the home of her maternal grandparents, the Parks of Chicago at 7523 Seeley Avenue. This same census indicates that she was employed as a corespondent for a mail order.

At age 23 Martha was married Earl B. Terrill, Jr. They had 2 sons. Martha’s husband seems to have applied and received several patents.

This is the death notice for Martha Ellen’s husband: