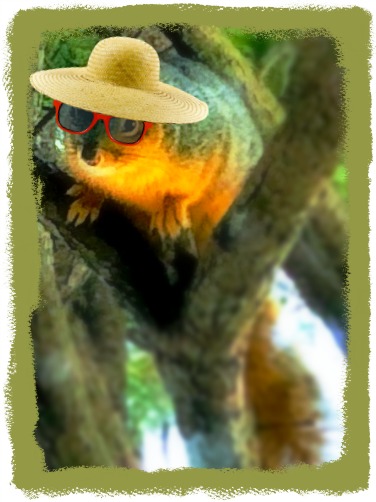 It was a Monday and the squirrel detectives were spending their morning chattering together and reviewing their Summer detective accomplishments. Just in the month of August alone, the squirrel detectives had solved two very critical cases at the city park. The squirrels wanted their contributions in these solved mysteries to remain anonymous. They didn’t do detective work for the admiration of others, they just wanted to be good detectives. Summer was now coming to a close, the squirrels chattered among themselves remembering each case from the summer months and how they had had cleverly solved them. Their excited squirrel voices made loud happy chirping sounds throughout the park and their bushy tails waved up and down.

First there had been mission #1: A woman named Leslie had carelessly lost her heirloom heart-shaped locket. The locket had been a special gift from her Grandmother. The squirrels had to grab the locket by it’s silver chain, scamper up to the tree tops with it, and then they had to keep dropping the necklace carefully down into obvious spots along the path that Leslie was taking (and I must note that she was headed in the completely opposite direction of where the locket had been lost). It only took the two necklace drops before Leslie noticed it. She had a strange sense that it had fallen from a tree, but then decided that conclusion must simply be her nerves talking. Leslie then also made the false assumption that she had located the locket on her own merits without any assistance. The squirrel’s mission had been accomplished!

and then after mission #1 there was

mission #2: A man named Bob McIntyre lost his i-phone at the park and the squirrels watched him drive away without noticing that he had left it on a picnic table under the park shelter. Fortunately, Bob McIntyre had the lamest pass code for his phone. The squirrels simply tried the combination 1-2-3-4 and they were “in”. They noticed that Bob’s i-phone had several apps. They first tried the Google translate app , but translations from squirrel chatter to English were not available. So, the squirrels took some selfies using Bob’s Snapchat app. It was super fun for them to use the goofy filters that made their faces look so adorable and laugh-out-loud funny. The squirrel detectives even added some eye-glass stickers to their cute squirrel faces. Bob’s friends saw that he had posted hilarious squirrel photos on his Snapchat feed with hashtags such as #Squirrel-Strong, #Squirrel-Detectives, and #Squirrels- For-Nature-Conservancy. And Bob’s friends, who had always thought Bob to be a bit too stuffy and very serious, were now completely delighted and amused that he had suddenly become very funny.

The squirrels had the idea to post photos on Bob’s Facebook feed of the picnic table under the shelter where they planned to leave the phone for Bob. Bob McIntyre saw this on his home laptop and was therefore able to find his phone easily the next morning. He was a bit dismayed that there was no message or note for him near the phone. He still wonders about this.

Before the squirrels had put Bob’s phone down on the picnic table for him to find, they had taken the time to look at Bob’s profile photos on his Facebook feed. There were only a few photos of Bob from the whole summer. In each of those photos, Bob was always alone and wearing an old gray rumpled t-shirt that had no design or pattern. He also wore over-sized wrinkled cargo shorts and flip-flops. Bob was an o.k. looking guy, but he was not smiling in any of those photos. There were simply no happy summer photos of Bob.

The squirrels wanted to complete one more mission before the end of summer.

And so there was mission #3:

Basically, the squirrels wanted to do some match-making and they saw Leslie and Bob as a likely couple. However, the squirrels didn’t really need to do much to make this happen. You see, both Leslie and Bob had such pleasant times at the city park, that they both started walking there nearly every day. One day, Bob worked up his courage and complimented Leslie on her locket. She told him about how it had been nearly lost at the park and then found. So, Bob shared the story about his i-phone’s return to him under strange circumstances. They became friends.

On the first day of Autumn, the squirrels noticed that Bob was back at the park. He was wearing a new green Nature Conservancy t-shirt, some crisp blue jeans and great looking adidas hiking shoes. The most important thing that Bob was wearing was a smile. Why was Bob so happy? Because Bob was walking with his new friend Leslie (and yes, she was wearing her locket). Bob and Leslie were enjoying the crisp Autumn air, they were holding hands and they stopped three times to use the Snapchat app on Bob’s i-phone to do some funny selfies. Their hashtag was #Autumn-For-New-Friends. Then, Bob and Leslie whispered and smiled at each other and also posted #City-Park-Squirrels-Are-So -Cute. They were excited and happy about all the adventures that awaited them.

They didn’t even notice all of the squirrels just overhead of them doing high-fives, cartwheels, and grinning from ear to ear. It was Autumn and love was in the air. #Nature-Conservancy-Detective-Squirrels-And-Matchmakers.