When Louis Riley Meador was born on April 1, 1889, in Eureka Springs, Arkansas, his father, Robert Lewis Meador, was 27 and his mother, Charlotte Lucinda “Lottie” Shipman, was 24.

Louis’ father died when Louis was only 6 years old.  In the census of 1900 Louis is living with his mother and his siblings: Jasper, Maude and Rita.

Louis’ sister, Maude Lillian Meador , is our family’s direct ancestor.  This makes Louis Meador (who is rthe subject of this blog) a  Great Uncle.

At the age of 28, in the 1917-1918 WWI draft registration, Louis states that he is short, slender, with blue eyes and light colored hair.  Perhaps, one of the most interesting things about his registration form is the PERFECT penmanship.  He lists his residence as 104 Wall, Eureka Springs, Arkansas (I believe this was his mother’s home).  He lists his occupation as draftsman.  He lists his employer as Clark Jacoby of Chariton County, MO. (see photo at the end of this blog)

Louis married Marie Van Norden in 1929 in the Canal Zone, Panama where he was in a supervisor position on the construction of the canal.  They had no children.

Other than some census records and a treasured photo found on Ancestry, there was little information known about Louis until I recently came across an article from June 12, 1929 that addressed Louis’ upcoming marriage to Marie Van Norden.

The article was from a newspaper named “The Morning Call” of Laurel, Mississippi.

This led me to find ship records for 1931 when Louis Riley then 42 years old and his much younger wife who was then 25 years old took passage on the ship “Iriona” from Panama Canal Zone to New Orleans.

In the 1940 census, Louis and Marie lived on Paris Island Road in rural  Beaufort, South Carolina.  He lists his occupation as engineer stating that he has completed 4 years of college.  He lists his employer as the US government and his annual income as $3,200.

Louis died in November 1985 in his hometown, at the age of 96.  (Helpful hint, in the news story below Mrs. Louis Church is Louis’ sister, Rita May Meador) 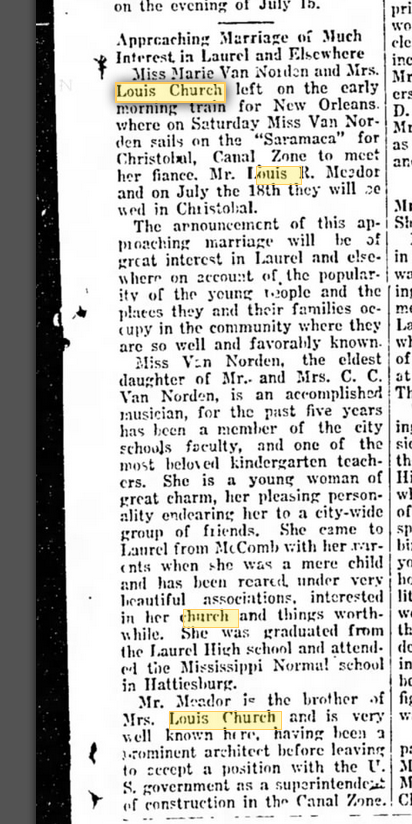 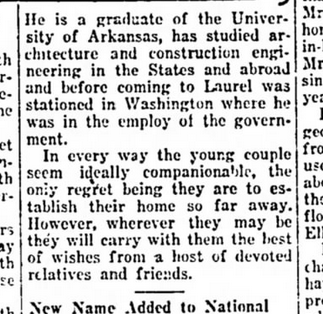